Using Recycling - Even for Halloween 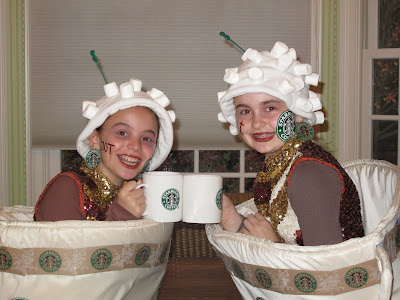 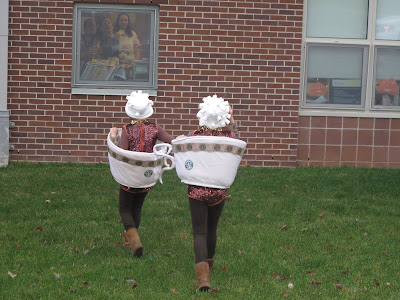 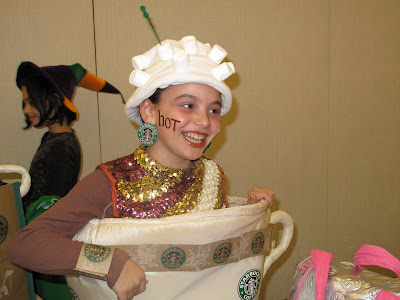 So the prep began a few weeks ago. What to be, what to be? Store selections didn't grab us. And all you do with that brand new prepackaged costume is wear it once and put it away in the closet hoping a younger friend or relative will ask to borrow it for next year. And that rarely happens.
Wasn't there anything we could make? Anything we could use from stuff we already had? We had an idea for a costume. Then I heard about Tony; a man with years of experience with costumes for Broadway shows. Tony is a man with a barn 3 stories high filled with costumes and accessories. Fabulous! Maybe we could find something that would look like a coffee mug/container/cup; something already made and just waiting to be used again.
When we first went up to see Tony it was a little spooky. The door to the inside porch of his house was left open and it was filled with years of memories. We knocked. We rang the bell. We called from our cell phones and heard his land line ringing with our call. Nothing. We walked across the way to the barn. We pushed open the old door. Wow. Old file cabinets, draped tables, pirate jackets, band outfits, maiden gowns, lace, and webs. Still no Tony. Was he up in the rafters? Could we just walk up those creaky, steep and narrow steps? We had an appointment. Where was he?
"Let's just get out of here" spoke a little voice (yes, my daughter). We called again. No Tony. "Can we please just go..." At that point we did have to leave but our friends could wait a bit longer.
A few minutes later the call came in from Liz - "they have some tea cups and a majorette costume - I think it could work."
A few days later we went back. We combed through the top loft filled with head gear. White fluffy feathers...? An option. But, I am a bit weary of used or shared headgear. We left without a whip cream topping accessory but we had the makings of a coffee cup. Man hours later we had Starbucks branding our Halloween and we were gluing marshmallows to felt hats.
The best part - happy smiles and the delight that we were, for the most part, able to "recycle" a costume.
Happy Halloween!
And, more on branding next week.
Posted by Jackie Orr at Friday, October 30, 2009 No comments:

Not So Scary Halloween 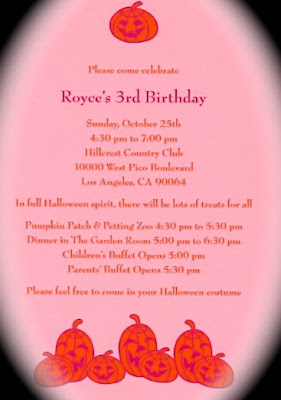 Lots of treats for a halloween birthday! Isn't this sweet?
Posted by Jackie Orr at Tuesday, October 27, 2009 No comments: 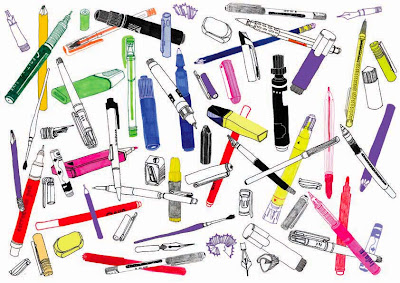 The power of the written word is quite strong. Receipt of a recent note had me feeling joyful, fabulous and, oh so successful and appreciated for days. All those feelings came from just a few short words.
The young lady (I sound so old saying that!) who penned this note compared opening her very first blue Tiffany box (a gift we gave her - and yes, there was something inside) to witnessing her first snow. Well, ... WOW! How cool is that?!
Now, this fabulous girl loves nature, the earth, humanity, etc., so the particular words she chose really had impact. And, I could totally relate to what she said being both a Tiffany and snow lover myself.
Point here is that her written words had power. I am still smiling as I recall her words days later. A cookie cutter statement off a list of 5 different ways to say thank you just doesn't do the same thing.
And, check out the site of the London illustrator who "penned" the illustration above. http://www.henniehaworth.co.uk/objects
Posted by Jackie Orr at Friday, October 23, 2009 No comments: 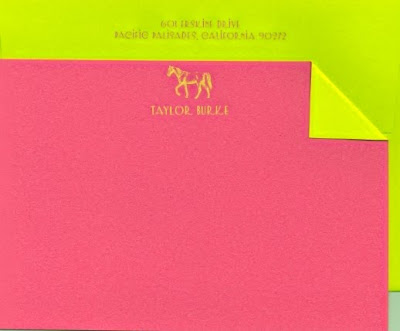 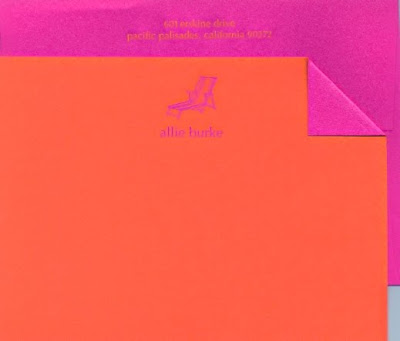 2 lucky sisters just got some very nice stationery for no apparent reason except to write notes. Yes, there are other forms of communication aside from texting! And, how pretty. I love the different color on the back of the card. And how cute are these motifs? From Arzberger.
Posted by Jackie Orr at Tuesday, October 20, 2009 No comments: 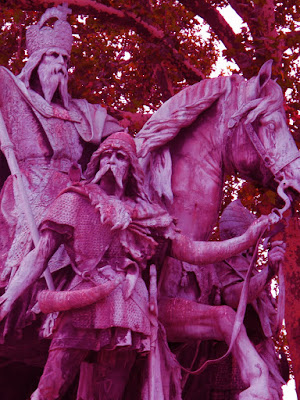 A pink wash for Charlemagne. Courtyard of Notre Dame. Just for fun.
As far as looking at life through rose colored glasses, there is nothing wrong with that... "glass half full" as the saying goes. After all, while it is true that our trip to Paris unexpectedly ended 24 hours after arrival, a week ago we were strolling through a beautiful city without a plan or an agenda, relaxing in a cafe, and enjoying life. So, better a day in Paris than none at all. La vie est belle!
(By the way, I really was in rose colored glasses. )
I hope you enjoy/enjoyed this week's posting "trips" to Paris. BTW, for anyone visiting in the near future, we had a fabulous dinner (yes, I realize it was the only one we had) at Le Bambouche, 15 rue de Babylone ( www.lebamboche.com). If you click on the tab "Cadre", you will see our table - photo top right. During dinner, they do dim the lights.
Posted by Jackie Orr at Friday, October 16, 2009 No comments: 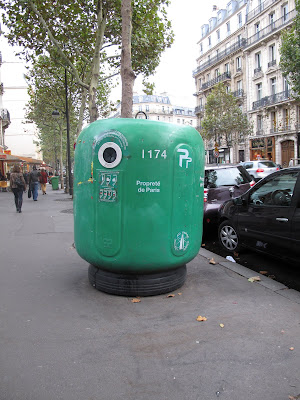 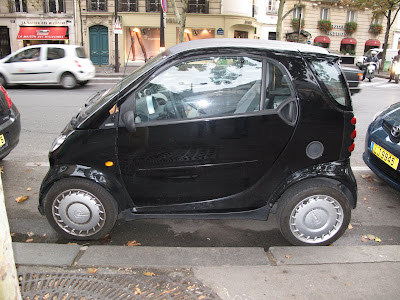 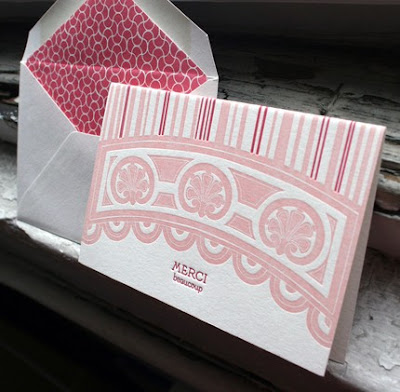 Another order is in. You may have seen this already but I am in a French mood so here it is again. Packages of 6 notecards with envelopes/liners for $14. Letterpress from Smock. And it is pink.
Posted by Jackie Orr at Tuesday, October 13, 2009 No comments: 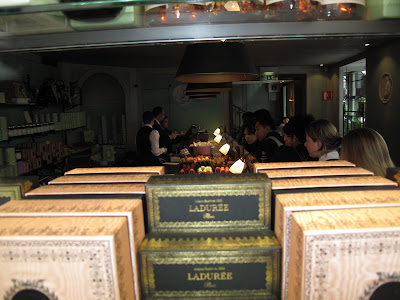 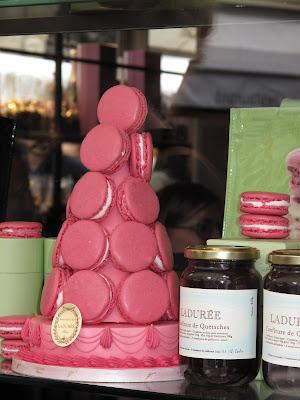 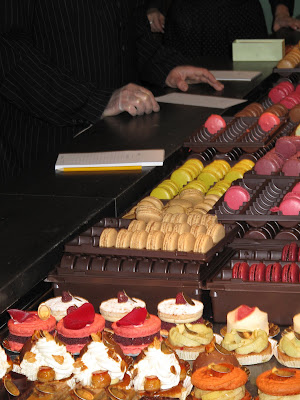 Well, Paris did not go exactly as planned - in fact rather than watching Coco Before Chanel on the flight over, I should have watched Paris in 24 Hours because we had to fly home early - but all is fine now. http://video.yahoo.com/watch/140787/1703744.
C'est La Vie - we will try again in the Spring.
In the meanwhile, those 24 hours were great. One of the first stops (and yes, I know there were not many) was Laduree (www.laduree.com). My husband was sure it was a shop for soaps. But no, it is not; it is a patissier, a chocolatier, a place I was drawn to when I first spotted the window display (see above). And yes, there was really a line out the door. About $20 later we had a few ( really just a few - 4 to be exact) different flavors of the famous macaroons; red fruits, lemon, "pamplemousse" - grapefruit - which is my favorite. Great texture, color, flavor but I have to say I felt underwhelmed. Perhaps it was that we ate them out of a bag as we continued our walk through the streets. When we go back we will take our time, sit down and enjoy them with a little "cafe". Like many things, it is about presentation, about patience and love.
Posted by Jackie Orr at Monday, October 12, 2009 No comments:

Email ThisBlogThis!Share to TwitterShare to FacebookShare to Pinterest
Labels: travel

Bonjour! What better movie to watch on my way to Paris than Coco Before Chanel ... Audrey Tautou is mesmerizing! Click above to see a bit. Of course, while I am in Paris I will be scouting out some Parisian paperies. Any special requests? Just let me know via a comment or an email.
Posted by Jackie Orr at Friday, October 09, 2009 No comments:

Click here for an easy and free way to help fund mammograms for those in need at The Breast Cancer Site!
Posted by Jackie Orr at Tuesday, October 06, 2009 No comments: 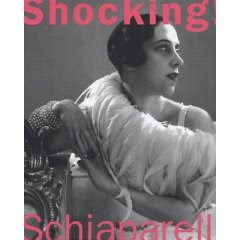 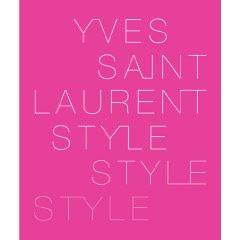 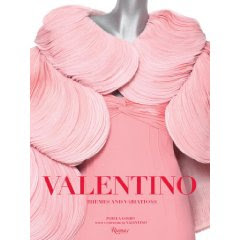 I like these books and their covers - - which are pink. (As if that wasn't obvious!)
And, because I am in a pink mood, the next 3 orders placed and processed during this month which contain any pink to them at all will receive a nice pink surprise. Maybe my niece will rethink her "old" favorite...
Posted by Jackie Orr at Friday, October 02, 2009 No comments: