What's Green about the Red Carpet?


2 days away from the Oscars and there is a lot in film this year to celebrate. Diverse topics and themes - from madness to overcoming adversity to social networking and more; easy springboards for meaningful cocktail and dinner conversation. My personal favorite for best picture is The King's Speech even though it might be less historically meaningful than The Social Network.  For best actor, I have to go with Colin Firth. Hands down. And did you know that Colin Firth and his wife, Livia,  own a store in the UK called Eco-Age ?

"We at Eco Age work with the best of national and international designers to bring you the best from the sustainable world. From toys to bespoke furniture, green cleaning products to energy saving gadgets, this is the place to be."

Many of the nominees have a "green" association but what are some of the green films this year?
Waste Land and Gasland are the two of the better known films in this category and both are up for Best Documentary. Waste Land is set in Rio de Janeiro and depicts life for those who depend on and make their living "picking" from the world's largest garbage dump/landfill. Gasland - see trailer above - is a view into natural gas extraction via hydraulic fracturing. Both films were winners at Sundance.  Gasland received additional attention, as did actor Mark Ruffalo, (one of my favorites and up for Best Supporting Actor in The Kids are All Right) when it was rumored that he was put on the terrorist watch list by the Office of Homeland Security in Pennsylvania - he did organize several screenings of this film. (Other eco-impact films include Sun Come Up and Warriors of Quigang - I have not watched these yet.)


I read somewhere that Livia Firth put up a challenge for this year's awards season  - to wear sustainable fashion on the red carpet. Well, I am up for this challenge but I will not be anywhere near the red carpet Sunday night; I will be home in an organic cotton tee shirt and snacking on organic popcorn. I think this counts.

Is Something Wrong with Jimmy Choo? 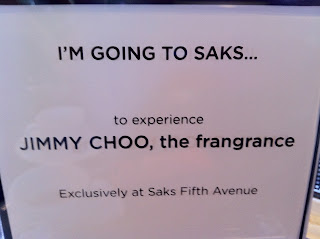 Having lunch at Saks during Fashion Week - this sign on every table... everyone should use spellcheck!
Posted by Jackie Orr at Friday, February 18, 2011 No comments:

Do White Bodysuits Go With Everything at BCBGMAXAZRIA?

Mercedes-Benz Fashion Week is here, back at its new home at Lincoln Center. We were there Thursday, the first official day, excited and looking forward to a great day. Days at the shows are never a disappointment; always full of anticipation and excitement. This day was no different.

Take a look at the BCBGMAXAZRIA show (above). The Theatre was packed, standing room only and everyone was ready to go. As the show progressed it became quite clear that there was a theme - the theme of the sheer white bodysuit with black cuffs. The take away from the show being that a sheer white bodysuit with black cuffs goes with just about everything. Really?! Yes, really...  the piece is shown with almost all of the 34 looks. And, yes, it is a look.

Why this staple? Is this to keep the plunging necklines decent and wearable for those of us who don't walk the runway or the red carpet for a living? What do you think? Are you up for the elongated proportions, "the desire for simplicity" and the bodysuit for Fall 2011?

I must say that I do love the cobalt silk chiffon dress - color, color, and color. And, who knows, maybe that sheer white turtleneck with black cuffs will end up in my closet; after all, it does go with everything! 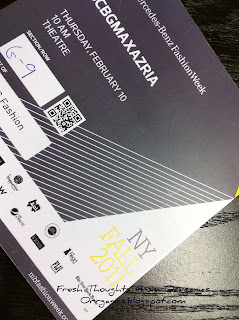 Of course outside the venue, in the Plaza, you get lots of street fashion. Meet George (see below). The take away from George: "Baby, it's cold outside." 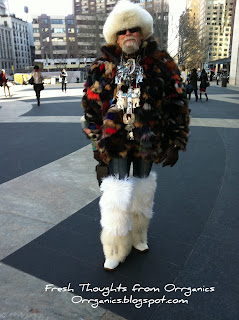 Thanks to Hillary, Helen and IMG!

Posted by Jackie Orr at Saturday, February 12, 2011 No comments:

Last week at the 2011 FIS Freestyle World Skiing Championships (the most significant event outside of the Winter Olympic Games), the was no fear of flying and no fear of color!

It was a 4 day party on the mountain at Deer Valley Resort (home of the 2002 Winter Olympic games) and at Park City Mountain Resort. (Feb. 2 - Feb 5.) There was great food, fine mountain hospitality, big enthusiastic crowds - great TV production (yes, hubby Bob and his JUMA operatives!) - and true sport! I was able to get up close and personal for viewing and photos. 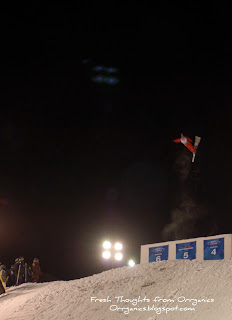 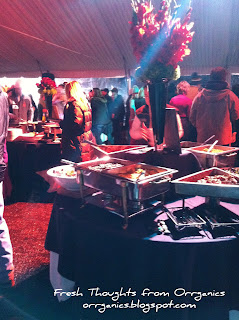 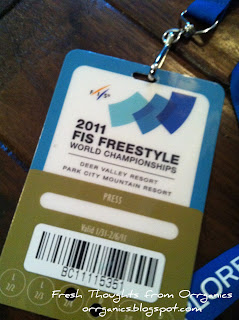 Lucky me, I got to ski with Nikki Stone, 1998 Olympic Gold Medalist (Olympic Winter Games in Nagano, Japan); America’s first-ever Olympic Champion in the sport of inverted aerial skiing. But we stuck to downhill skiing - no pro am Aerials for moi!


FYI - a brief description of the various ski events:

Aerials: Skiers throw themselves off ramps rising 50 feet in the air and then they twist, flip and hope to land upright and with grace;

Dual Moguls: double ouch! This time, 2 skiers race each other to the bottom to advance on the the top.

P.S. I really love the font on the Russian jackets! 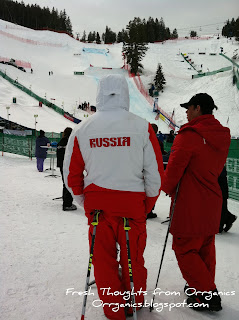