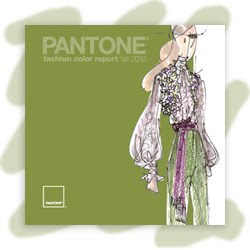 The colors above are what the industry experts see as the fashion colors for Fall 2010. They are rich, inviting, exciting and optimistic colors that allow for creative combinations. Chocolate Truffle with Purple Orchid or Lipstick Red, Endive and Oyster Gray.
Of course, with Turquoise being the color of the year (see prior blog from January 2010) there had to be a new blue in there and it is a great one! It's blue Lagoon. (Are you thinking of a young Brooke Shields?) To get a good look and some more interpretations on the colors from designers, click here for the Pantone Report.

Images above from Pantone.
Posted by Jackie Orr at Wednesday, March 31, 2010 No comments: 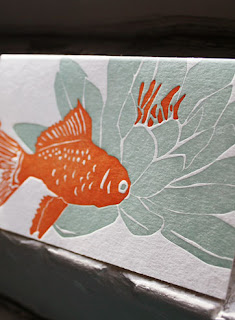 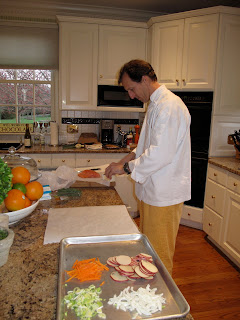 Chef Theo Petron of A la Maison at work. 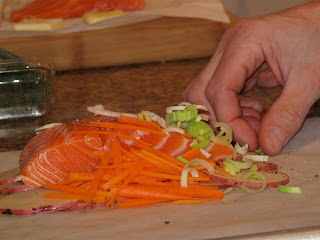 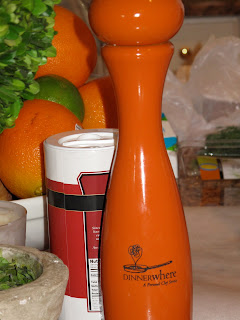 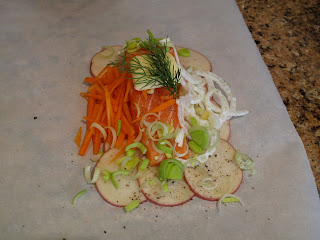 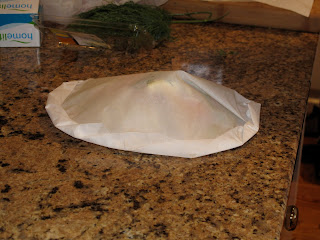 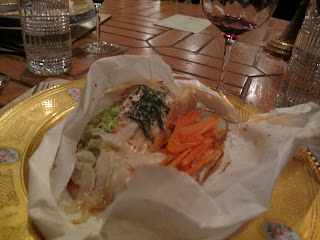 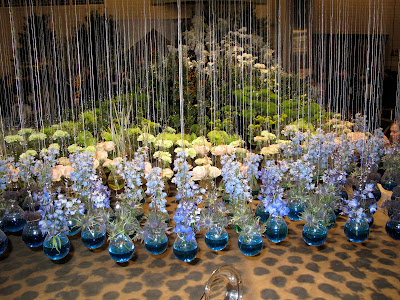 I just love this display of turquoise (pantone color of the year) and green. It really gets me in the mood for Spring and chemistry. 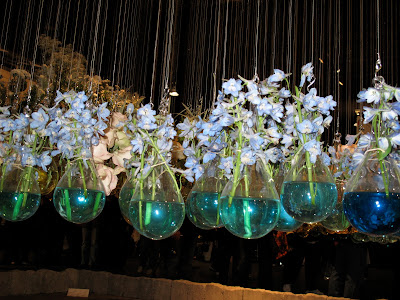 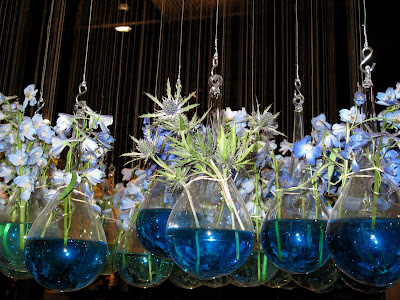 Makes me want to experiment. 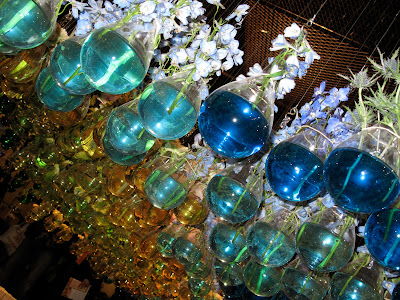 The photos are mine, the display was by Beautiful Blooms LLC, in Philadelphia at The Philadelphia Flower Show 2010.
Posted by Jackie Orr at Tuesday, March 23, 2010 No comments: 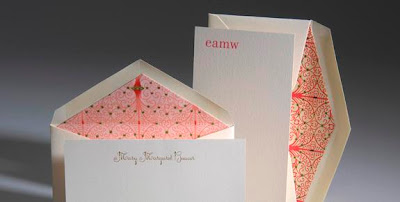 I am in love with Japanese silk screened papers - they make a perfect envelope liner for your new spring stationery or a beautiful addition to a wedding invitation suite. Let's have some fun!


Photo above courtesy of Arzberger Stationers
Papers from Papermojo
Posted by Jackie Orr at Friday, March 19, 2010 No comments: 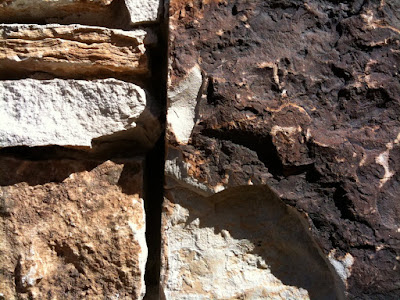 My new Pantone app kept me very busy for hours yesterday as I planned a color makeover and traveled back home, across the country, from Deer Valley. I had mountains/stone on my mind and now it will be up on my walls. The app allows you to take a photo or use an existing photo from your library, then tap on the part of the photo you are interested in for color. Tapping reveals a Pantone color and number. You can review harmonizing colors, fan decks and more. Look at what I got from tapping on various parts of my photo. Chocolate Brown, Turkish Coffee, Winter Wheat, Monk's Robe, Coffee Bean, Seal Brown, Vanilla Ice, Anthracite and more. 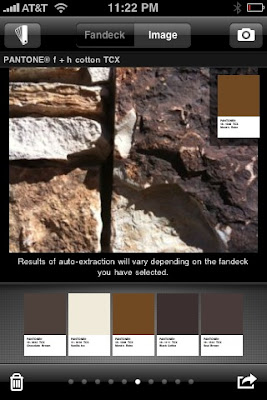 Warning, the color on the iphone screen may vary from the actual Pantone color /Benjamin Moore color. Actually, take out the "may vary" - it does vary. But, it is still a lot of fun to use and can be helpful.

FYI -I can't have a room without a bit turquoise, the Pantone color of the year. Stay tuned.
Posted by Jackie Orr at Tuesday, March 16, 2010 No comments:

Not Your Mama's Buttermilk

This new font is a recipe for success on your invitation.

It was designed by Jessica Hische, illustrator and designer.
Font announcement and image courtesy of Jessica Hische; visit her site for some fabulous eye candy.
Posted by Jackie Orr at Friday, March 12, 2010 No comments: 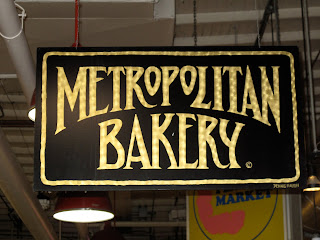 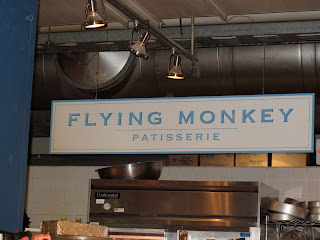 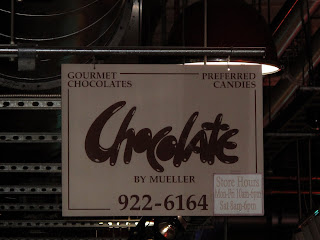 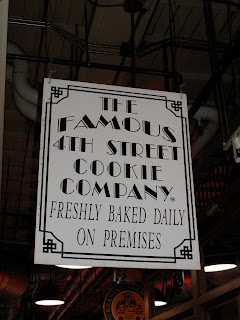 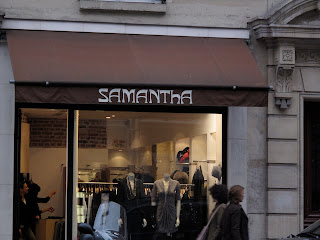 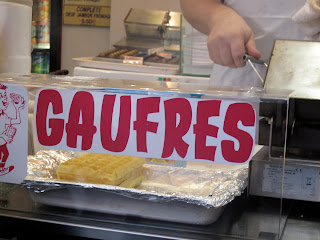 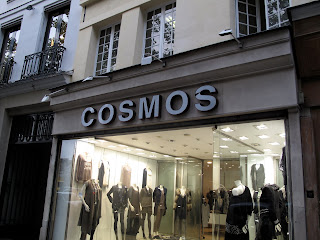 Selecting a font is like selecting a mood. A font can project energy and can set a certain tone. See what you feel with these vintage fonts.
Posted by Jackie Orr at Wednesday, March 10, 2010 No comments:

The 1o movies nominated for the “Best Picture” award are:

Avatar - I have had no desire to see this except I think I should since it may very well win and my family loved it.

*The Blind Side - I saw this one (see prior blog in November) - loved it!

An Education - will see soon but not in time for Oscars.

*The Hurt Locker - saw this last week - couldn't take my eyes off of it.

Inglourious Basterds - will see this.

Precious - I really want to see but don't know if I can.

*A Serious Man - saw this last month and thought I was sitting down to watch A Single Man; for those of you who have seen both, you will immediately recognize how ridiculous that is!

*UP in the Air - I saw this - great writing here (not bad scenery either).

So, I have seen 5 out of the 10 Best Picture Nominees (the ones with the *). Given that until this year only 5 films were nominated, I feel like I have seen enough to weigh in. Going out on a limb here for The Hurt Locker but I have to say that if there was a category for Best Feel Good Movie, I would go with The Blind Side (close second would be UP). Now, when actually does Avatar win, I have a built in excuse that I did not see it yet. And, that is why I am not a movie critic.

I plan to enjoy the Red Carpet and also look forward to seeing the hosting duo, Alec Baldwin and Steve Martin. Here is a link to all the nominations.

**Winning Green: - Email who/what you think will win Best Actress, Best Actor, Best Film and Best Costume Design for a chance to win some Eco - Friendly Notecards. Winner will be selected from all correct submissions. Good luck! (Ya have to send in the email before the Oscars begin!)
Posted by Jackie Orr at Friday, March 05, 2010 No comments:

Email ThisBlogThis!Share to TwitterShare to FacebookShare to Pinterest
Labels: Oscars

"I'll Be There With Bells On!"

Who says that? And why? Well, me on occasion. And, on the last occasion (please don't fear, I don't really say this often) what I actually said/wrote was: "All righty. I'll be there with bells on!" Awaiting further response, what I got was a suggestion as to the origin of this phrase and the added thought that I might blog about it. Well, I always like a good suggestion so hear we go.

The phrase is typically used in reply to a party invitation to indicate one's enthusiasm about attending. Additionally, the use of 'I'll be there with bells on" implies not only that one is looking forward to the festivities but also that one will contribute to the festivities and everyone's enjoyment.

Some say that the phrase originated in the late 19th/early 20th centuries; most early citations suggest a US origin. Various suggested origins are:
- Prior to the days of the automobile, people decked out the harnesses of their horses with bells when setting off for parties and galas, parades and the like;
- During the settlement of Pennsylvania and other eastern states, immigrants traveled by large sturdy wooden carts or wagons. A team of horses whose harnesses were outfitted with bells drew the wagons. If a wagon got into trouble, got stuck, then a rescuer was often rewarded with the horses bells. If you arrived at your destination without your bells on, it was quite an embarrassment; arriving with your bells still on was a source of pride.
- Some mention the court jester and his hat with all the bells- it is of course the jester's job to be entertaining. But this screws up the US origin theory a bit.

One of the first records of the phrase found in print (maybe the first) is in F. Scott Fitzgerald's 1922 novel, The Beautiful and the Damned:

"All-ll-ll righty. I'll be there with bells!" And, the character was carrying 12 phonographs with her when she remarked this near same phrase. Sounds like she was "adding to the party and everyone's enjoyment."

Think about the following for your next response card:


And, Marcie Beth, I hope I contributed a bit to the festivities!
Posted by Jackie Orr at Tuesday, March 02, 2010 No comments: